skip to main | skip to sidebar

Angela and I walked to the Ethiopian Embassy while the others rode their bikes, but got their at almost the same time.  It was 7:45am and the Embassy wasn’t to open till 8am.  We patiently waited at the security gate on the edge of the property.  Just after 8am though, a very friendly lady walked out, shook our hands and introduced herself.  She was Agfa, a Zimbabwean who was the Administrator for the Embassy.  She explained what we needed to do, however said that we had to wait for the lady in charge of issuing visas to arrive which wouldn’t be too long.  We chatted with Agfa while we waited and got her to sing a song for us.  She had such a lovely voice.  The lady that issued the visas was Ethiopian and once she arrived, she also introduced herself to us and led us onto the property.  We walked through the security gate, not being searched, not signing in and into the Embassy into an office where we filled out the necessary forms.  Agfa sat behind a large desk in a small office and suggested that we get a 90 day visa instead of a 30 day visa and instructed us on how to complete the form, took payment together with our passports and asked us to return at 3pm that afternoon to pick them up.  That’s how easy the whole process was.  No mention of an invitation letter and no scary stories of waiting days or weeks to be issued the sought after visa for Ethiopia.  All the stories that we had read about getting this visa was very far from what we had experienced.

A day earlier, we visited the Canadian Embassy at at the security booth to enter the property, we had to sign in, show our passports, leave all electronics in a security box and go through a metal detector before entering the compound.  Once we entered the building, we spoke to a Zimbabwean through bullet proof glass and then set in a waiting room to be served which had security cameras around the room.  The contrast between these two Embassies were shocking as later that afternoon when we went back to pick up our Ethiopian visa, the key for the security gate was in the lock, the guard wasn’t around, so I stuck my hand in, turned the key and opened the gate.  As I opened the gate, the guard peered from behind a building, recognizing me, gave me the thumbs up and went back to what he was doing and let us enter on our own.

We had to wait for the Counselor lady to run an errand before signing off on our visas, but chatted to Agfa in the mean time.  She was one of the friendliest Embassy workers we have dealt with and finally when she handed our passports over, we all posed for our photo with her.  She was so ecstatic that we enjoyed her company and wished us luck for the rest of our travels. Agfa handing over our passports

Now with our Ethiopian visas in hand and being Friday, we were going to patiently wait out the weekend to visit the Egyptian Embassy on Monday.  We decided to get our Egyptian visas in Harare instead of Nairobi as we were comfortable camping at the Small World Backpackers, the Embassy was close by and we had all the amenities accessible to us.   To kill the weekend. a few of us took a ride out to the Bally Vaughan Wildlife Sanctuary, about 45 km outside of Harare.  The sanctuary takes in all kinds of animals that have been injured and rehabilitates them to be released back to the wild and is solely funded by donations.

It was a nice pleasant ride out on Saturday morning, not too much traffic as we navigated through downtown Harare as people started setting up their market stalls.  Once we hit the outskirts of town, we started hitting the police road blocks.  We were stopped at one and waved through a few others.  Just a friendly chat and we were off again.  As we rode into the Sanctuary, we passed a few monkeys playing around, a few horses, a zebra and a zorse – a combination of a zebra and horse. 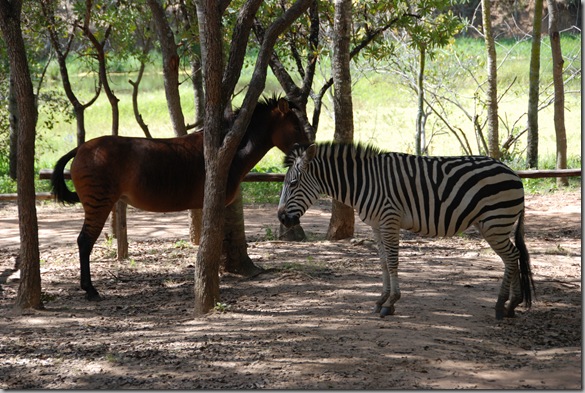 As soon as we parked the bikes and locked our gear to the bikes, we were in close proximity to the lion enclosure.  There were 2 lion enclosures, the very first one held 2 female lions and the second one further into the sanctuary held 2 more females and a male and apparently the owner was in the process of building another enclosure for 4 more lions that were due to arrive in a week.  It was midday and the big cats were taking their afternoon siesta as we walked through the sanctuary.  The predators were in enclosures while the zebra’s, horses, goats, cows, donkey’s, chickens and ducks freely wondered around the grounds. 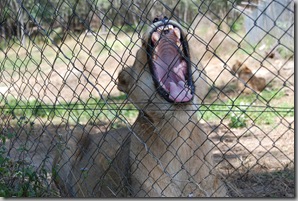 Sarah the owner of the facility takes on volunteers from around the world to help her with the daily tasks in rearing these wild animals and getting them ready to be released back into the wild.  I forget the guy’s name, but we met a guy from Fort St. Johns, BC that was on the volunteer program for 3 weeks before returning to Canada. 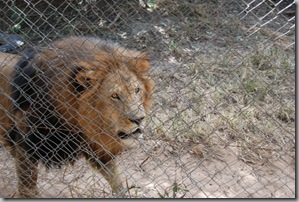 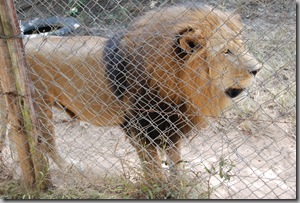 We spent a couple hours walking through the sanctuary oggling over the parrots, bunnies, turtles and tried hard to spot the leopard who was in hiding.  Had some lunch at the cafe and I took a nap sitting and listening to the sound of the animals while the others ventured to the small creatures area.  If you are in Harare, the Bally Vaughan Wildlife Sanctuary is definitely worth a visit. 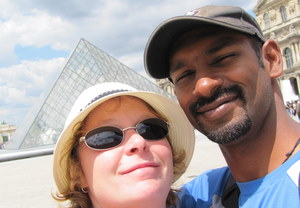 
View One World 2 Explore Tracker in a larger map